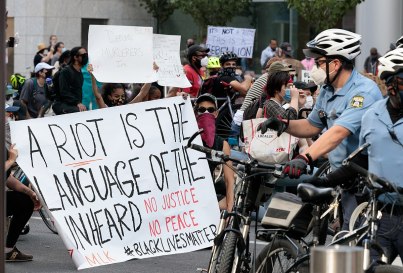 In this moment—as in every moment where there is an opportunity to move toward justice—there are only two choices:

That’s it. End of the story, bottom line, period. There is no third middle-ground option because, as Desmond Tutu so eloquently says, “If you are neutral in situations of injustice, you have chosen the side of the oppressor.” This post is one of the ways I’m trying to choose justice.

Below is a list of resources, mostly meant for white people, to learn about racism and get involved in racial justice efforts. There are opportunities to read (both books and shorter writings), watch (both films/TV shows and shorter videos), listen, sign petitions, donate, and more. Resources with an asterisk* are ones I’ve personally read, watched, or engaged with; resources without an asterisk* are ones that have come highly recommended and that I plan to read, watch, or engage with in the near future.

If you have questions about these resources or want to talk more about racism and racial justice, you can comment on this post or contact me directly. This list is definitely not exhaustive; it comes from my limited perspective and thus contains limited resources. I encourage you to engage with other resources and participate in other conversations, especially those shared by people of color. As for this particular post, you’re more than welcome to share it if you think someone you know would find it helpful.

Engaging in racial justice is hard. It’s hard for allies, and it’s infinitely harder for people of color, who must advocate for their own existence. As we do this hard work, remember to take care of yourself. Light a scented candle, meditate, take a bubble bath, exercise, play video games, whatever you do for self-care. Personally, I’ve been limiting my time on social media and doing calming crafts. True activism is a sustained effort over time to be better and do better. And it’s not going to happen if you burn out in the next week. Do the work, but remember to take care of yourself, too.

True, we are often too weak to stop injustices; but the least we can do is to protest against them. True, we are too poor to eliminate hunger; but in feeding one child, we protest against hunger. True, we are too timid and powerless to take on all the guards of all the political prisons in the world; but in offering our solidarity to one prisoner we denounce all the tormentors. True, we are powerless against death; but as long as we help one man, one woman, one child live one hour longer in safety and dignity, we affirm man’s [woman’s] right to live.